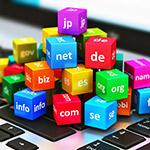 More than 400 new gTLDs have been approved and are live today. It is too early to tell which will be successful, but preliminary observations suggest that .com remains, for most, the TLD of choice when conducting business. The general view is that the most successful of the new gTLDs will be the .brands such as .apple.

It is not possible to cover everything that is happening at the Internet Corporation for Assigned Names and Numbers (ICANN) with the new generic top-level domains (gTLDs) in a short article.

More than 400 new gTLDs have been approved and are live today. It is too early to tell which will be successful, but preliminary observations suggest that .com remains, for most, the TLD of choice when conducting business. The general view is that the most successful of the new gTLDs will be the .brands such as .apple.

A .brand gTLD is an efficient way of marketing a brand: it ensures people get to the website and teaches consumers that if the website name ends in .apple, for example, they can be confident about with whom they are dealing. The problem with .brand gTLDs at this point is that the cost of purchasing and operating a gTLD is estimated to be between $300,000 and $500,000. That is prohibitively expensive, other than for companies of considerable size and whose brand is sufficiently well known by consumers to justify both the expense and the initiative.

There is speculation in the marketplace about a fresh round of new gTLDs. Informed rumours suggest there will be no more new gTLDs offered until the current round is complete and the appropriate review of the process/results has been completed. It is seen as prudent to carefully assess the success/failure of what was a very lengthy process, before opening up the system to further gTLDs.

Informal comments indicate that the board of ICANN would prefer not to have more rounds of new gTLDs, but rather that people will simply apply for new gTLDs as they become interested in them. This will not happen soon.

There are always rumblings in the background about alternatives to the current domain name system (DNS) and ICANN.

Many countries continue to express concern about the undue influence the US exercises over the root zone and, indirectly, over ICANN. In particular, the exasperation of a number of European companies over ICANN’s refusal to block domain names and gTLDs that comprise geographical locations’ names has created political ripples extending to the International Telecommunication Union (ITU), a United Nations agency.

Two other factors have created an environment in which there is some uncertainty about the direction of internet governance and ICANN’s fitness for being the principal player in this field:

The decision by the US government to remove its oversight of ICANN. Many countries are very uncomfortable with this decision. Several have expressed the view that this is too important a resource to be left in the hands of an independent non-governmental organisation, and it ought to be in the hands of an organisation such as the ITU that is part of the UN (and moved to Switzerland to be free of the US legal system).

Somewhat related, there is again ‘talk’ of some countries separating from the internet and creating their own intranet, following the current difficulties in relations between certain nations, including Russia, and some of the countries in the Middle East. There are many counties where the content generally available on the World Wide Web is considered highly objectionable.

In most of those countries, efforts are made to block sites that are considered to be offensive, but it is difficult to do so. A local intranet could be closely controlled and would cut most people off. However, with satellites and other technology it is becoming extremely difficult for governments to effectively shut down what they do not want their people to see.

For this reason, a lot of governments have said publicly and privately that UN control of the DNS could more effectively address content issues, as ICANN has essentially little or nothing to do with that issue.

It appears ICANN will survive and maintain its role in the internet world. However, it must establish to the satisfaction of the US government and the members of the ICANN community that it has instituted an acceptable method for being held accountable. The issue of establishing reasonable accountability for its decisions is crucial for the US to approve ICANN’s independence.